At first glance you just fall in love with this car. The shape inspires passion and awe. It was the first-generation mustang tweaked a bit. The first-generation Mustang Fastback had a nose up and tail down. Whereas, the fifth-generation Mustang had the similar lines but a different front and rear geometry. What the chief designer Larry Erickson did was got the idea from the best design for the Mustang, fine-tuned it. For e.g. he canted nose down with a big grille and round headlights like the ’67 to ’69 Mustangs. The tail section of the car and taillights resemble the 1965 vintage and is higher up compared to the nose which was opposite in vintage Mustangs from 1965-69. It had a fastback roofline and the side sculpting. The side windows are in shape of a trapezoid, how it was done in the Caroll Shelby GT350 style on the 1965-69 models. The Mustang design starts low in the front and inclines upward at the back. The rear geometry rolls up and out and curves down at the rear bottom section making it a fresh infusion of how grass rolls into earth at the corners. Let’s roll into the minutiae.

This new car is a concoction of styling from the first-generation Mustang. Ford got a lot of accolades for the first-generation Mustang which was the best-looking pony of the era. The new Mustang is the icing on the Ford’s lineup as it has been carved to detail. It is a 24 karat AAA Tanzanite that you get after a long wait. Why I say this is because all the first-generation Boss’s, Shelby’s, Fastback’s and Mach 1’s were sent into a mine. The cars were allowed to sit there in the heat of ideas and then after the conundrum and crystallization, a new gem was born. The razorback edges and sharp shoulders give a new posture to this gem.

There are two engine options, a V6 and a V8. It also has a 5 speed manual gearbox and a 5 speed automatic gearbox option. It has a Strut MacPherson suspension in the front and a live axle at the back. The car has distinctive looks and it has all the bells and whistles, whims and fancies from the great Detroit manufacturer.

The 2005 Mustang’s interior finesse matches the exterior design theme and looks unique. It has the influence of Generation I Mustang. The big speedometer and tach, the round air vents, the dash with aluminum accent panels and the round steering wheel hub. The interior comes with changeable backlighting which can be changed just at the press of a button from white to blue to green to orange hues.

Ford announced this car in 2004 Detroit Auto show and has delivered the promise with the price. The V6 Convertible Premium is priced at $26,000.

The original Mustang’s interiors; The squared off, double cowl dashboard theme were returned in this model. Chrome rings are added to the large gauges and there is an option to add more aluminized trim and texture in the deluxe variant. The wispy-tiny gauge numbers have been reinvented from the previous model.

The surfaces must be modern or else the Mustang will have serious issues competing in the Pony Car Sales. So far, the design is good but it has other features that are shamelessly retro. Starting with the fish gills nose (shielded behind clear plastic headlight lenses), full moon driving lamps and chrome medallion on rump. The V-6 comes with 16-inch Pony 5 spoke alloys. 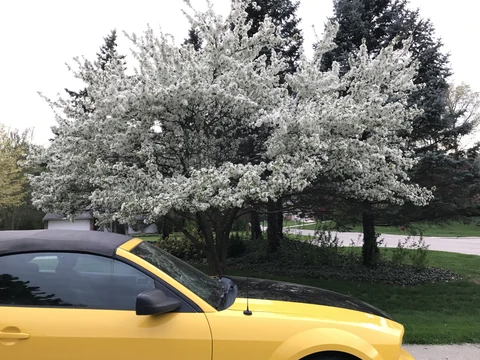 "Basically, we asked, 'What's the last rear-drive program we were happy with?' and started there," says Mustang chief engineer Hau Thai-Tang.

The newest DEW sports a much longer wheelbase than the Fox (107.1 inches versus 101.3 inches). It also features clipped overhangs; a better relation among the steering wheel, pedals, and shifter; and more distance from the front axle to the dash, as if the car had been stretched out like taffy. Indeed, the DEW Mustang is 4.4 inches longer stem to stern than the Fox. Front-seat passengers get the most benefit; adult riders in the coupe's rear seat will still be seeing their knees and scraping their noggins on the glass.

The new platform should be less jiggly, with torsional rigidity of convertibles rising a claimed 100 percent over the old Mustang and 10 to 15 percent over the Thunderbird. Even so, curb weights should be within one percent of the current 3300-to-3500-pound Mustang, says Thai-Tang, thanks in part to the use of prewelded, variable-thickness stamping blanks and an aluminum hood.

Although the other DEW vehicles have all-independent suspensions, the 2005 Mustang goes without. That's mainly to keep down costs, says Thai-Tang. It's also partly because the majority of Mustang owners don't know or care what kind of rear suspension they have, he says, and partly to serve street racers and quarter-milers who love a live axle's simplicity and cheap interchangeability.

Ford's new car czar, Phil Martens, group vice-president of product creation, says, "When I first got here [from Mazda in March 2002], I made the decision to put the solid axle back in. To go out and immediately disband what people know this car to be, which is the best high-performance sports car for under $20,000, is a mistake."

The live axle has been revised from the old Mustang's four-link rear. Gripping the axle now are two lower trailing links, a single upper link, and a Panhard rod for side-to-side stiffness. Replacing the old setup, two triangulated upper links, with the Panhard rod allowed engineers to relax the bushing stiffness in the links to soften the ride while fortifying the axle's lateral stiffness with the Panhard. Ford also upsized the axle shafts for better camber stiffness. Sharper steering response and cornering control should result.

In the nose, Ford has affixed low-friction struts braced by L-shaped welded stamped-steel lower control arms. The front coils that rode directly on the control arms of the Fox Mustang have now moved to their more appropriate position on the strut itself. Drivers should enjoy a tighter, more-tied-down feel to the front end, says chassis engineer Mark Rushbrook, along with less noise and impact harshness.

"We focused a lot of attention on the tuning of the dampers," he says. "We want a firm damping feeling that was not present in the old car."

The base 4.6-liter V-8 now features an aluminum block and receives the SOHC 3-valve aluminum cylinder heads and variable-cam-timing mechanism from the new Ford F-150's 5.4-liter V-8. Engineers have squeezed more airflow efficiency from the heads, in part with a computer-controlled intake flap that varies the port sizes with engine speed. At low speeds the flaps constrict the passages to create a venturi effect and induce turbulence for better charge mixing. At higher speeds they open wide to let past the rushing atmosphere.

Expect 60 mph to whiz by in the low-five-second range in a manual V-8, somewhere around seven seconds for a V-6. All we need is Jan and Dean and the Great Society, and boomers will be babes again. 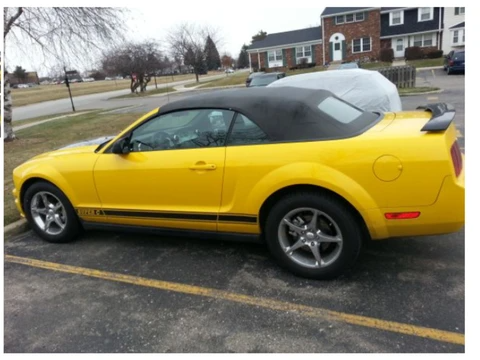 Cobra Aspires To Be M Fighter

Phil Martens has put his fingerprints all over the new Mustang. At the helm of Mazda until March 2002, when he became Ford's group vice-president for product creation, Martens helped engineer the 2005 Mustang's move from Ford's assembly plant in Dearborn, Michigan, to the Ford/Mazda plant in nearby Flat Rock. There, the Mustang takes advantage of Mazda technology for better body assembly and quality control.

Martens also has an idea of where the next SVT Cobra is headed: "We have to have a Cobra that is world-class level. The old Fox platform couldn't deliver that; this one can." Expect a bigger, broader separation between Mustang GTs and SVT Cobras, he says. BMW's M cars are serving as inspiration; hence, the next Cobra will have to have an independent rear suspension, he says.

"It has to. The expectation in this category is for a much more refined product." Also likely: supercharging and a substantial increase from the current Cobra's 390 horsepower. Ford has set no firm price ceiling, Martens says. "The only restriction is that you have to build it on the [Mustang] line, and the quality has to be there."